I was asked by a friend to troubleshoot a marine band radio. Opened up the radio and found a open trace. To the left of the red wire is the reverse protection diode (shorted), I cut the diode out, soldered the trace back and it powered up! But no audio was coming out, to the right of the red wire you can see another trace leading to the audio amp, I used a signal tracer (Heathkit 5283) and found the input to the amp was working fine, the amp is a LA4425. It's been discontinued but I found a few on ebay from around $1.50 Each. Come to find out the radio was hook up with reverse polarity with no fuses. Just waiting on the LA4425 to come in from china. I used a 1N5408 to replace the reverse protection diode. 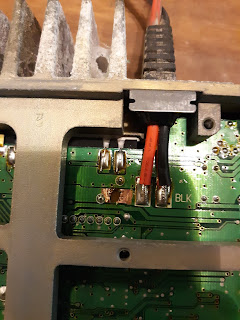 Hello my name is Chris Johnson and this page is set-up to display some of my electronic projects. All projects are open source / open hard...